They say that April is the cruelest month.  I say that April is what you make it.  I often get restless and just want to go.  I needed to take a short break, even if it was a long weekend.  Some people take trips to Vegas or maybe Florida.  Matt and I like to travel for art, events, experiences.  We might go to see a play in another city like Chicago, or get on a plane and spend a weekend checking out an art exhibit in San Francisco.  For us, that is way better than dropping quarters in a slot machine.

I learned that Dorrance Dance Company was going to be appearing at Dartmouth University and it looked like a moment when we could take a trip. Who is Dorrance Dance?  I may have waxed poetic about this woman before but the company founder is Michelle Dorrance, a tap dancer extraordinaire.  Honestly, I never really thought about tap dancing at all.  But a few years ago after she won a MacArthur Genius Award, she appeared on Stephen Colbert’s show and at that moment, I fell in love with tap.   Watching Michelle and her company perform puts a huge smile on my face. I get exuberant, irrationally so.

So I said, hey, let’s go and see Dorrance Dance perform a show we have never seen.  Okay.  Where is Dartmouth again?  I know this sounds dumb, but  I’m not an Ivy League aficionado.  I knew it was somewhere in New England, but I was not real clear on the state.  Turns out, it’s in Hanover, New Hampshire, not far from the Manchester Airport and a very convenient Southwest Air flight away.

What else do we need?  How about a spa because, well, why not?  Woodstock Inn in Woodstock, Vermont sounded just the ticket.  Where is Woodstock?  Who knows.  We would figure it out when we got there.  So off we went for Dorrance Dance Company at Dartmouth and a visit to Woodstock Vermont.

Woodstock Vermont cannot possibly get any more quaint as a typical New England town Any post card of Vermont with its autumn orange and yellow maple leaf colors against a white church spire  has to be a picture of Woodstock.  Clapboard Victorians, white churches with spires, and a town square exuded New England charm.

The Woodstock Inn is an old style New England hotel, with a huge welcoming fire place in the lobby, lots of wood panelling, and cozy nooks for book reading.  We arrived to find the weather had turned quite cold and rainy, with a little snow mixed in.  Having just left daffodils and spring in Washington, it was quite a shock.  We dumped our bags and headed back to Hanover for the dance performance.

Completely occupied by Dartmouth, Hanover seemed like any college town, lots of bars, kids and activity.  We had dinner at The Pine, the restaurant in the Hanover Inn.  The food was excellent, from the truffled deviled eggs, beef tartare with quails egg, to the wild boar pasta.  It was all just tasty.

Tap Dance is the Bomb

The Dance Performance was titled: The Blues Project with Toshi Reagon and BIGLovely featuring Derick K Grant and Dormeshia Sumbry-Edwards.  Toshi Reagon is a folk/blues/funk musician from NYC .  Derick Grant is known for appearing in Bring in Da Noise, Bring in Da Funk.  He has some significant history.  Dormeshia Sumbry-Edwards supposedly taught Michaek Jackson how to moonwalk.  All together they put on a fantastic high energy performance of original music and great choreography.  Go to her website and take a look at some of the groups performances.  Tap dancing is like the banjo–there is nothing sad about it.

After the show, there was a Q & A.  Matt raised his hand to ask a question and he told Michelle that we had come all the way from DC, we had seen her in three states at this point (Maryland, Pennsylvania and New Hampshire), and we are prepared to travel more to see her great shows.  She was so touched by this.  Blown away really.  After the Q & A, I ran down to the stage to get her autograph on my program.  I was explaining to her that we absolutely loved her company and that she just made us happy. Matt came up and piped in and we talked for a long time.  She told us that if she is in DC, she will try to give us a head’s up so we know she is coming. And you know we will be there.

Birds are pretty cool too.

What does one do in Woodstock?  Falconry.  The Inn had teamed up with a company that offers plain old folks like us the adventure of playing with birds of prey.  New England Falconry allowed us to put on the leather glove and have a bird free fly to our outstretched arm for its meaty treat.  This was an incredible experience.  First, we met a falcon in the barn. 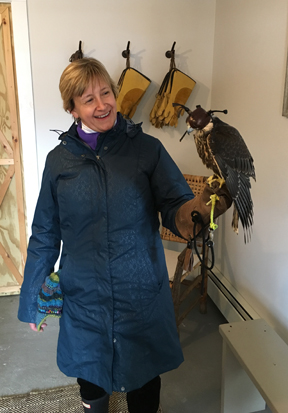 He was very small and we woke him up from his nap so he kept dozing off as he perched.  The falcon was not flying weight which means that he was a bit too well fed and if we put meat on our hands, he would not fly to it.  So while we got to hold him, but we did not get to have him fly for us.  His eyes were covered because they get nervous and he was a little more calm this way.  Just gorgeous.

At the end, the falconer took off the mask so we could see his large eyes.  We were told to be still and not startle him.  Check this out.

After the falcon it was time to head outside to play with some birds.  The first was a Harris Hawk named Conrad.  Conrad was beautiful. 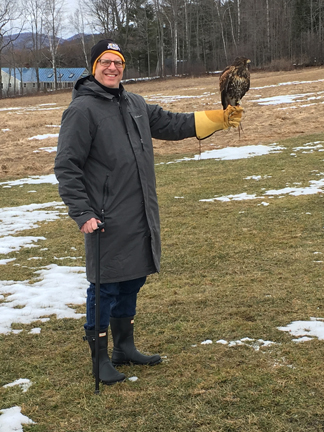 Here are some quick answers to your questions.

No, the bird is not heavy but even at two pounds, holding your arm out straight for any length of time is tiring.  So the falconer taught us how to pull the bird close and put the arm next to the body to take the strain off.

Yes, they have really big claws that can hurt you. Luckily they are well fed and have no interest in trying to eat us.

No, flying like this is not instinctive behavior.  They are trained to fly to the hand with the meat.  Some birds are easier to train than others.  They all have their own personality.

No, these birds were not taken from the wild.  They were all born in captivity. or rescued

Here are some videos:

After we played with Conrad, we worked with a barn owl named Alba.  Again, glorious bird.  The falconer explained that this owl was raised as a baby and has imprinted to the woman who raised it.  That means that Alba thinks he is a person and he is very jealous of other males–human males.  Apparently he gets very feisty with certain men who enter his area.

We were told that owls are a little harder to work with and can fly off on their own just because some tree or sound interests them.  So Alba was on a lead.  Here is a video:

It was really cold outside and the birds were good sports about coming out but they were cold and so were we.  So after 90 minutes of falconry, we went on our way, back to the hotel spa for some warmth and TLC.

Massages, mimosas, Vermont cheese, a sauna, and a dip in the hot tub outside in the cold were just the thing we needed to end the day.

But what about the sheep?

The front page of the morning paper had the most adorable photo of baby lambs that had just been born at the Billings Farm Museum.  We figured out a way to go see those cuties before we left town.  Just take a look at them in their cute little sweaters.  Adorable. 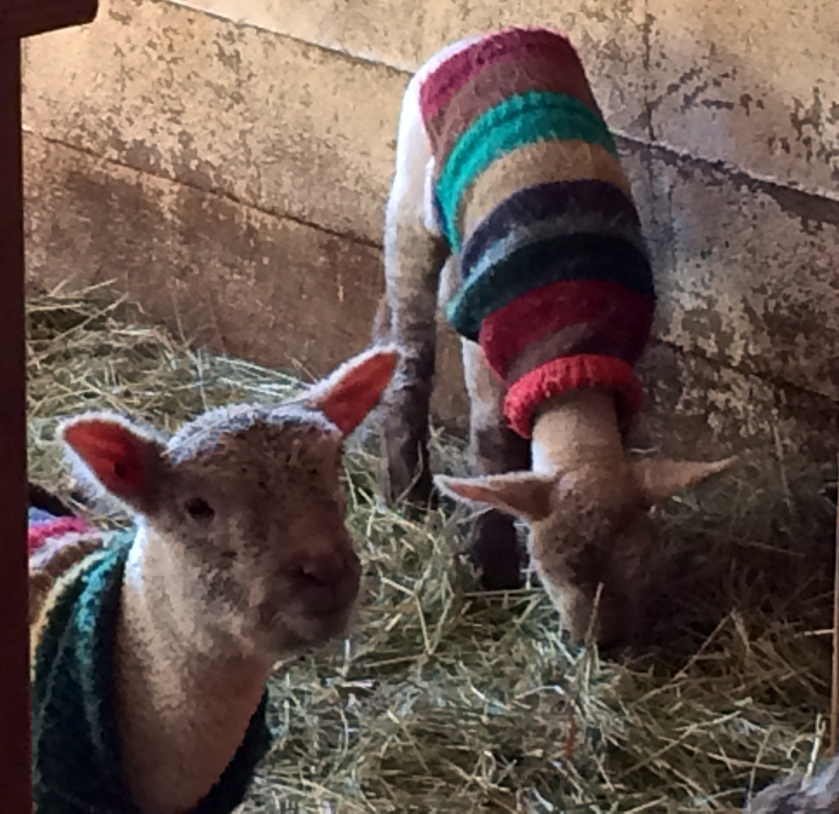