A month gone by and it has been nothing but cold

January has come and gone.  In the middle of the month Matt had surgery to address the continuing issues with his foot so we have been a little absorbed in that process.  But here are some highlights:

Geeze, it’s cold out there. We complain that we never get winter here any more but this year, we are getting way more than we want.  Snow and the polar vortex have made January interesting and miserable.  It convinced me that I would never live in a place where it got very cold and stayed cold for months.  No to International Falls, no to Alaska, no to the Arctic.  I suppose if there was snow all the time and groomed cross-country ski trails, it might help (I’m talking about you Vermont) but even so, when it is below zero, I don’t think even cross-country skiing would get me outside.  There is a point at which it is just miserable.

We have had a series of snow storms and that has been consistent for weeks.  On January 3, we got five inches and I went out into the yard with my skis for a go around.  By January 7th, the temperature had dropped to single digits and the back door window actually frosted over. 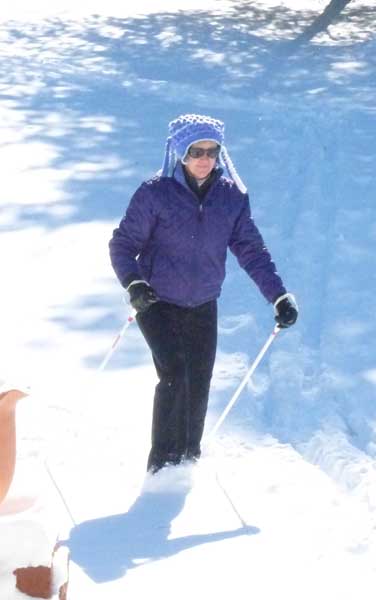 I’ve got enough room to make a loop around the yard. 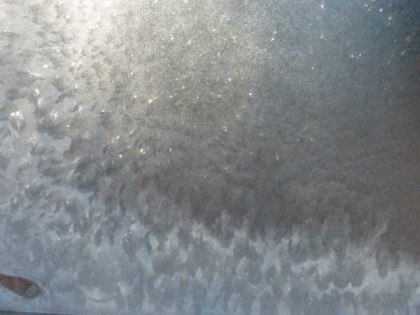 Frost on the door

On January 15, Matt had surgery to cut a nerve to his great toe, doctor speak for big toe.  His saga is incredible.  Three years ago, Matt jammed his toe into the sand while boogie boarding at the beach.  He has been in pain to the point of being unable to walk normally for almost three years now and no one can figure out why.  Five doctors later, we came to the conclusion that the last best option was to just stop the pain completely and cut the nerve to the area.  It helped a lot but not completely.  There may be more surgery ahead.

With Matt on the DL, I get to shovel snow.  I don’t mind since it is good exercise but I have been doing a lot of it and this time it was cold in the extreme, single digits again, with a wind chill of freaking cold!  So Matt kindly paid some guys to shovel the driveway after the last storm which dumped another five inches.  I fed the birds instead.

These are coyote tracks.

There have been animal tracks all over the yard.  Rabbits, of course, and squirrels but most interestingly, something canine.  We think it was a coyote.  I went out and took a look. It came over the fence, went straight for the rabbit hole, dug into it and there was nothing left but a few pieces of fur on the ground.  Then it walked away and hopped over the fence.  It came back again a few days later and checked under the shed, which is where I think the rabbits hide, but I saw no sign of dead rabbits this time.  I took pictures of the tracks but by then the snow had blown enough that they were not clear.  Matt has seen a coyote and that is the only animal that would jump a six-foot fence and kill a rabbit.  We don’t think a fox could make the leap.  Perhaps it could be these were not fox tracks and they sure were not dog tracks.  We plan on getting a motion sensor camera to see what goes on out there at night.

From: Life
← Gone with the Wind
Pho →
No comments yet